For the second season, Shoal could be found zooming around on the side of a Porsche 997 GT3 as part of the Australian GT series races, with this year the addition of QxBranch!

Driver Michael O’Donnell put in a strong performance this weekend at the Clipsal 500, placing third in Division 3 of the Australian GT Championships Round 1. Despite having the cheapest and least powerful car and going up against million dollar supercars with elite drivers, Michael actually posted the fastest time in division during the practice race.

The race provided excellent exposure for both the Shoal and QxBranch brands to a local and international TV audience. 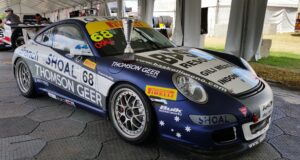