Recently, I blogged my thoughts on Australia’s response to the current Coronavirus Pandemic through the lens of the The Cynefin framework. These thoughts led me to conclude that there is a need for a National Resilience Framework that can enable contestable, impartial and consistent decisions to inform our nation’s balance of investment and enhance our national resilience in preparation for the next national shock. Graeme Dunk, Shoal’s Head of Strategy, strengthened this argument with his thoughts on a Post COVID-19 Vision for Australia, reinforcing the need for a National Resilience Framework.

So what is resilience?

The word resilience is derived from the Latin verb ‘resilire’, which means to ‘recoil’. When you think of this in terms of a spring, recoiling is to return to its original form. For another definition, we can look to Merriam-Webster’s online dictionary. It provides two definition of resilience that are broadly similar, except that they diverge through the perspectives of the physical and functional aspects of systems:

My preference is to focus on the behaviour of a system, or its function. When we think of resilience, in the COVID context, I believe we are considering that the system of interest needs to perform (function) in a resilient manner, i.e. being resilient to recover from misfortune. Resilience is, therefore, the ability of a system to firstly resist the misfortune, or shock, and then secondly recover from the shock-induced drop in performance and hopefully re-attain the original performance or better. 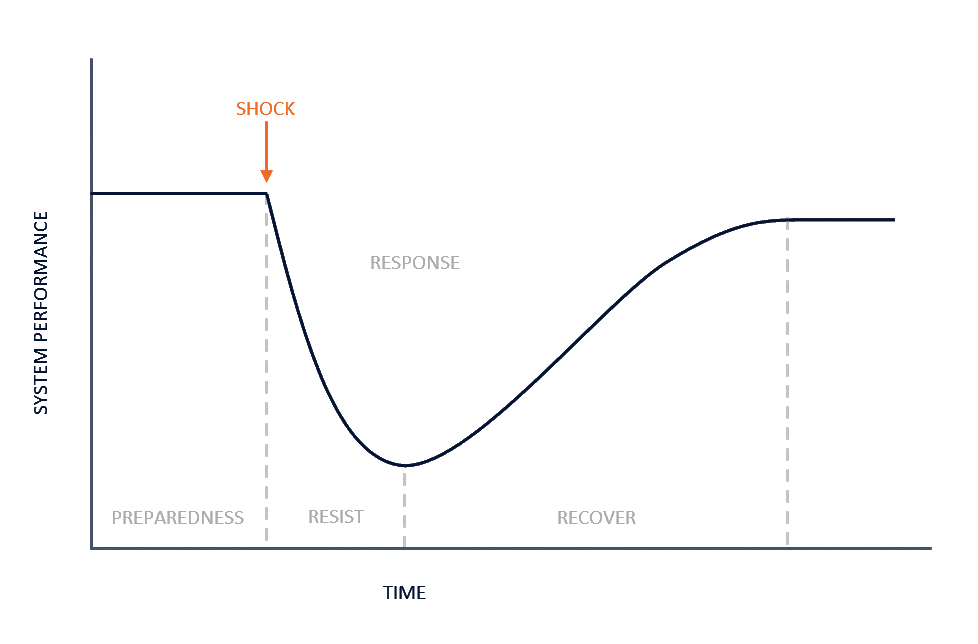 Having come from a military research and development background, a simple example I have previously considered is that of a GPS-based electronic map versus a paper map. If the electronic map gets hit by a bullet it fails and becomes a dead weight. It is brittle. Conversely, a bullet hitting a paper map produces a hole and the map can still be used, albeit in a somewhat degraded state. It is resilient to the shock.

A final observation is that resilience is context dependent. With the map example, a shock of a fire would result in the opposite result. The paper map would be ash, whereas the electronic map could potentially withstand, or resist, the heat of the fire and continue to operate, albeit in some form of degraded state.

Resilience in systems, whether they are physical, organisational, or societal, is the ability of that systems to resist and recover from a shock to the original performance or better. Now that we have defined resilience, in our next blog, Graeme will discuss resilience in the context of a national risk-based approach, from policy to implementation. Kevin Robinson is Chief Engineer at Shoal. His background is in systems thinking and developing frameworks to model and analyse complex systems. He also leads research into resilient and adaptive complex systems.